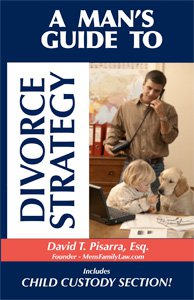 A Man’s Guide To Divorce Strategy

Perhaps Brad Pitt should read my book because in the ongoing divorce and child custody battle between Superstars Brad Pitt and Angelina Jolie, the judge in the case has rejected Brad’s bid to protect the children and keep the case sealed. Brad wanted to keep the case private so that the children wouldn’t be exposed to the ugliness, which is sure to leak out to the press.

Angie had other ideas. She wants this as public and nasty as possible is all I can surmise – it’s a common tactic so that the other side wants to bring a close to the case quickly by giving her what she wants. It appears she wants to move to London and work for the United Nations, which is probably why she’s now claiming that man she spent a decade lauding for his fathering skills, is now a danger to his children. If she can prove that, she can get Sole Legal and Sole Physical custody – which makes her move to London a slam dunk.

However, the 52-year-old losing this battle is not surprising. “Divorces are public,” California Divorce Attorney, Dave Pisarra, tells HollywoodLife.com EXCLUSIVELY. “If it was just a paternity action, it would automatically be private and confidential, but that is not the case here.”