Could Brad Pitt win Primary Physical Custody of His Children with Angelina Jolie?

A major issue in any child custody battle is whether or not a parent is abusing the children, usually not physically, but emotionally. It’s certain in my opinion to be an issue in the Brad Pitt and Angelina Jolie child custody and divorce case. Her behavior of trying to alienate the children from Brad is a clear indicator to most experienced observers of abusive behavior. The emotional abuse that one parent perpetrate upon a child is astounding, especially in area of parental alienation. I have no idea if the situation is that bad with Brad and the children, but in my experience the dangers to the children are real for children who have been alienated from a parent. And the effects are probably even worse on the parent, who suffers greatly at the loss of time and relationship with a child.

The “cure” for this behavior is a wholesale switching of custody, obviously judges rarely do that lightly. The case has to be brutally clear for a judge to remove a child from one parent’s home (especially if that is the “stable” home they’ve been living in).

I don’t have enough facts to really know what’s going on with the custody battle of Brad and Angelina, but I share my obserations with HollywoodLife.com here. 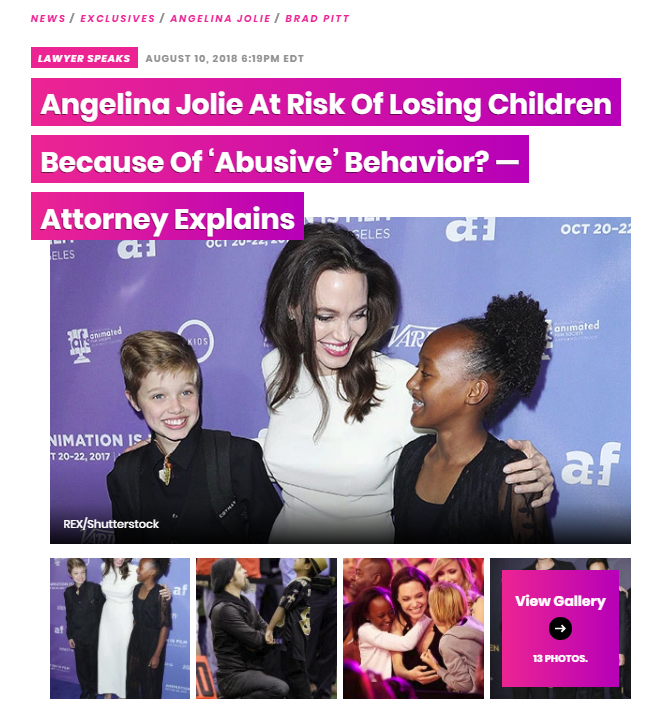 Could Angelina lose custody of her children for abusive behavior?